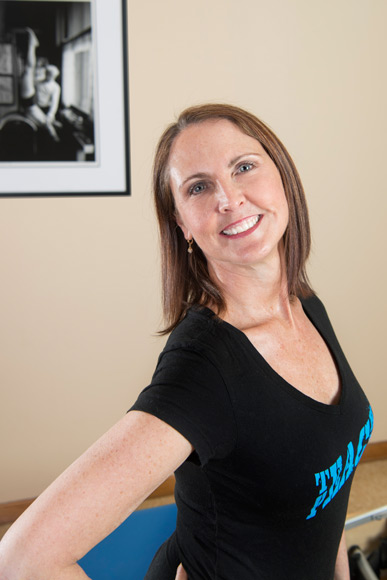 Amy Taylor Alpers and sister Rachel received their Pilates training in New York City at the original Pilates Studio and were certified as teachers by Romana Kryzanowska, heir to the classical tradition of Joseph Pilates. Today Rachel and Amy are master Pilates teachers and teacher trainers, published authors of the “Everything Pilates Book” and most recently, have partnered with Balanced Body to design CenterLine, the classically inspired Pilates equipment used throughout the studio.

Rachel and Amy grew up in Youngstown, Ohio where they began studying ballet at a very young age. Eventually both Rachel’s and Amy’s passion and commitment helped them reach impressive milestones in their ballet careers.

Rachel danced professionally with the David Taylor Dance Theatre and with Brent Mason and Company. She was the Director of Dance at the Arvada Center for the Performing Arts and taught ballet in New York City at The Alvin Ailey School. In addition to her dance credentials, Rachel received a B.F.A. from the University of Colorado and a B.A. in Dance from Loretto Heights College in Denver.

Amy attended The Julliard School for Dance and later performed with The Garden State Ballet in New Jersey. She received a B.A. in Dance and a M.F.A in Dance History from New York University. Amy also taught ballet at various dance schools in New York City for ten years.

Like many New York City dancers in the mid 1980s, both Amy and Rachel found themselves at the Pilates Studio where Romana Kryzanowska was carrying on the work of Joseph Pilates. Little did they realize then that in the following years they would witness the near extinction of Pilates and then play a significant role in the rebirth of the industry as well as becoming an integral part of Pilates history.

Over the decades, many Pilates teacher training programs have diverged from the original presentation of Joe’s methods. Amy’s and Rachel’s commitment is to maintain the powerful integrity and originality of Joe’s work as it was taught to them by Romana and as they learn it from archival films and the writings of Joe. It is this allegiance to Joe’s unique work that forms the following core beliefs from which Pilates is practiced and taught at TPC: